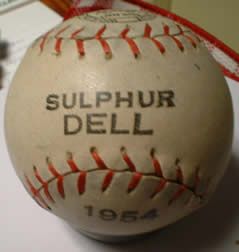 Poor attendance at Sulphur Dell began to plague the Nashville Vols in 1954, the third year of a three-year affiliation with the New York Giants. The team was well-stocked with power-hitting slugger Bob Lennon (64 home runs, 210 hits, 161 runs batted in) and steady first baseman Larry DiPippo (.298, 132 hits, 20 homers), but the pitching staff would have only one starter to finish the season with a winning record, Joe Margoneri (14-10).

Buster Boguskie would play 50 games at second base, 17 at shortstop, and 24 games at third as manager Hugh Poland attempted to find the infield combination that set a record for double plays in a season with 202 just two years prior.
Nothing was going right at the gate, either. After eighteen home games attendance was 21,626, compared to 23,762 in 1953. It was a downward trend that would continue throughout the season. Minor league baseball would suffer the worst overall attendance since 1945.

As a way of boosting attendance, at the June 3, 1954 game at Sulphur Dell, the Nashville baseball club gave away 1,000 miniature baseballs; 700 of those ‘small balls’ bore the signatures of major league players, and 300 of them had the autographs of Vols players.

Through June 3rd, Nashville was in fifth place with a 20-24 record, 8 ½ games behind Atlanta.
A few days later in the June 8, 1954 edition of the Birmingham Post-Herald, sports editor Naylor Stone wrote that Knoxville will replace Nashville in the Southern Association in 1955. Stone stated that the deal was done and Knoxville has assured a berth in the league even “before it erected its new $500,000 Municipal Stadium.”

“This season Knoxville re-entered the Class B Tri-State League with the understanding it would be released from Tri-State territory if a Southern Association franchise became available,” Stone wrote.

Knoxville had been a member of the Southern between 1932 and 1944 when the franchise was given to Mobile.
On June 11, 1954, Nashville club general manager and vice-president Larry Gilbert declared that rumors of the team being sold to Knoxville interests for $200,000 were untrue, stating that should the club be sold a Nashville investor would be the first consideration. He further stated that any sale would be a package deal to include the team and ballpark.

Not a Happy Ending

Nashville would end the 1954 season with a total attendance tally of 89,470 fans. On January 22, 1955, Ted Murray and Larry Gilbert, co-owners of Nashville, confirmed that they faced the loss of their franchise that the city had held since the league was organized in 1901. A 30-day option for the purchase of Sulphur Dell, the city’s ballpark, had been obtained from them by a syndicate in Nashville.

Reportedly, the syndicate planned to sell the property for business purposes and demolish the grandstand. It was rumored that interested parties in Knoxville, Tampa, and Jacksonville were anxious to obtain the franchise.
None of those things materialized, although Gilbert sold his interest in the club and moved back to New Orleans where he had maintained a home.

The decline of the Nashville franchise, however, would continue until 1961 when the Southern Association closed up shop. A new franchise was resurrected for one season in 1963 in the South Atlantic (SALLY) League, but the attempt was fruitless and Nashville had no professional baseball for fifteen years when the Nashville Sounds were formed for the 1978 season.